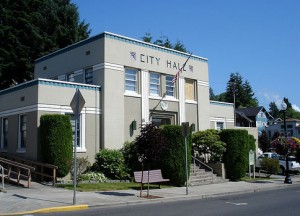 Located 9 miles East of Newport on Highway 20, Toledo has changed over the years from it’s founding in 1866. Home to 3,600 people, Toledo was first a boom town with timber in abundance which was easily rafted down the Yaquina to Newport. From there, the lumber was shipped by boat to Portland. At one point, there were 70 operating sawmills in the area — not the least of which was the mill run by the US Army during WWI to process sitka spruce for light weight air frames for military planes. Several dairies and small farms were run in and around Toledo. Today Georgia Pacific operates a paper mill on the edge of town and is a major employer.

Quite a number of restored Victorian style homes may be found here in the area known as the Arts District. This is an area which has attracted a group of well known artists who work in all the mediums. In September an Art Walk occurs providing a close up look at the artists in their home environments. The climate here is 10 to 15 degrees warmer than the coast so Toledo has become a bedroom community to many who work on the coast and is a popular garden center.

>>> View All Toledo Homes and Land For Sale

In Summer the City of Toledo hangs 60 baskets of flowering plants from antique street lights with a display that is said to rival that seen in Victoria, BC. When Highway 20 by-passed the down town in the early 1950’s construction pretty much stopped. In the interim many of the historic buildings have been restored and are now home to shops, restaurants and antique stores. If you happen to attend the Toledo Summer Festival there will be an opportunity to see one of the last logging shows in the Northwest.

Things to Do in Toledo

Yaquina River Museum of Art
Public facility for for the exhibiting art generated by and about the Yaquina River watershed region.